Today I learned an amazing bash command: shuf. It shuffles the lines of an input file, and prints them to the standard output. This is super useful when you want to sample a few lines from a very large file, to have an idea of its contents. See the image below for details:

I learned about this command while I was playing with Google’s “Covid Mobility Dataset”. This is a dataset of day-to-day relative changes in visits to 5 different location categories (essential shopping, shopping, parks, transportation, workplaces), as measured in Google’s “Location History” dataset, for many cities across the world.

Originally someone suggested me this data for a research project I’m working on, involving training agents to reproduce mobility patterns from humans. After studying the data, I came to the conclusion that it will probably not be very useful for this particular project. However, this is still a fascinating dataset, and I’m sure a lot of cool things could be learned from it, if anyone took the time to look through it.

Recently there has been a small subculture about reviving the 90ies style of the web, specially in places such as “neocities” (a geocities revival project). Today I learned about the glorious CASTLE CYBERSKULL, which takes this idea and runs with it: 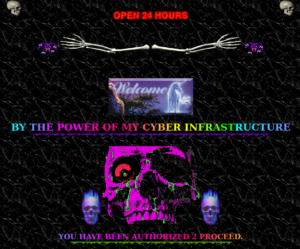 The above picture does not do justice to the GIF-crazy glory of CASTLE CYBERSKULL. Do take 5 minutes to visit this gem.

To be honest, back in the 90ies I kinda hated this aesthetic. My own website back then was an ugly affair with solid mint background and black letters and that was about it. But now the whole thing is nostalgic, and reminds me of simpler times.

By the way, the links section of CASTLE CYBERSKULL has a fantastic link to a page that loads random Youtube videos of 90ies hits. You can tell I spent a good part of my evening today surfing the nostalgia here.

Scholar.social is a Mastodon instance that I joined in April, 2022. The goal of the instance is to serve as a social hub for scholars, researchers and scientists of all kind to connect to each other, and talk to their work and their research.

It has been really nice to be a part of scholar.social these past few months. Conversations there are not as fast paced as on twitter, but they frequently go deeper, and the atmosphere feels much more eager and open.

In the past weeks, some users in scholar.social started preparing the “Summer School”, and online, informal conference where anyone is welcome to present a 15 minutes talk to the community.

To be completely honest, at first I was a bit skeptical. How can a “present anything” conference attract any sort of coherent content? But as I signed up to attend the conference and choose the topics that I wanted to participate in, the titles and summaries turned out to be quite amazing, and I felt myself checking in to participate into more and more of them.

I guess that is the power of an cooperative community? There is no real feeling of trying to show off, or competing for stakes, and everyone seem to be proposing talks about things that really matter to them.

Also the conference website is really pretty, easy to understand, and responsive, and the times of the talk are very well distributed across time zones. All in all I feel myself very much looking forward to this.

Here are just a few of the talks that particularly caught my eye. There are many more, which you can check out at the conference’s webpage.

– “Representations of AI – Why we need to do better”
– “Imaginaries of future energy systems”
– “Frugal computing — On the need for low-carbon and sustainable computing and the path towards zero-carbon computing.”
– “What the news gets wrong about spider bites”
– “Anti-capitalist AI”
– “Clinical trials that stopped due to Covid-19”

And many others! Looking forward to it!

This year I started a Games Club with some friends. The four of us would play games from the Itch bundles, usually narrative games, and get together some weekend to discuss the games. This has been a super nice exercise, both to get some socialization during Covid times, as well as a chance to play smaller indie games. (I posted about another game I played in this games club before)

This time, I want to talk about “Signs of the Sojourner”, a game which I liked quite a lot. 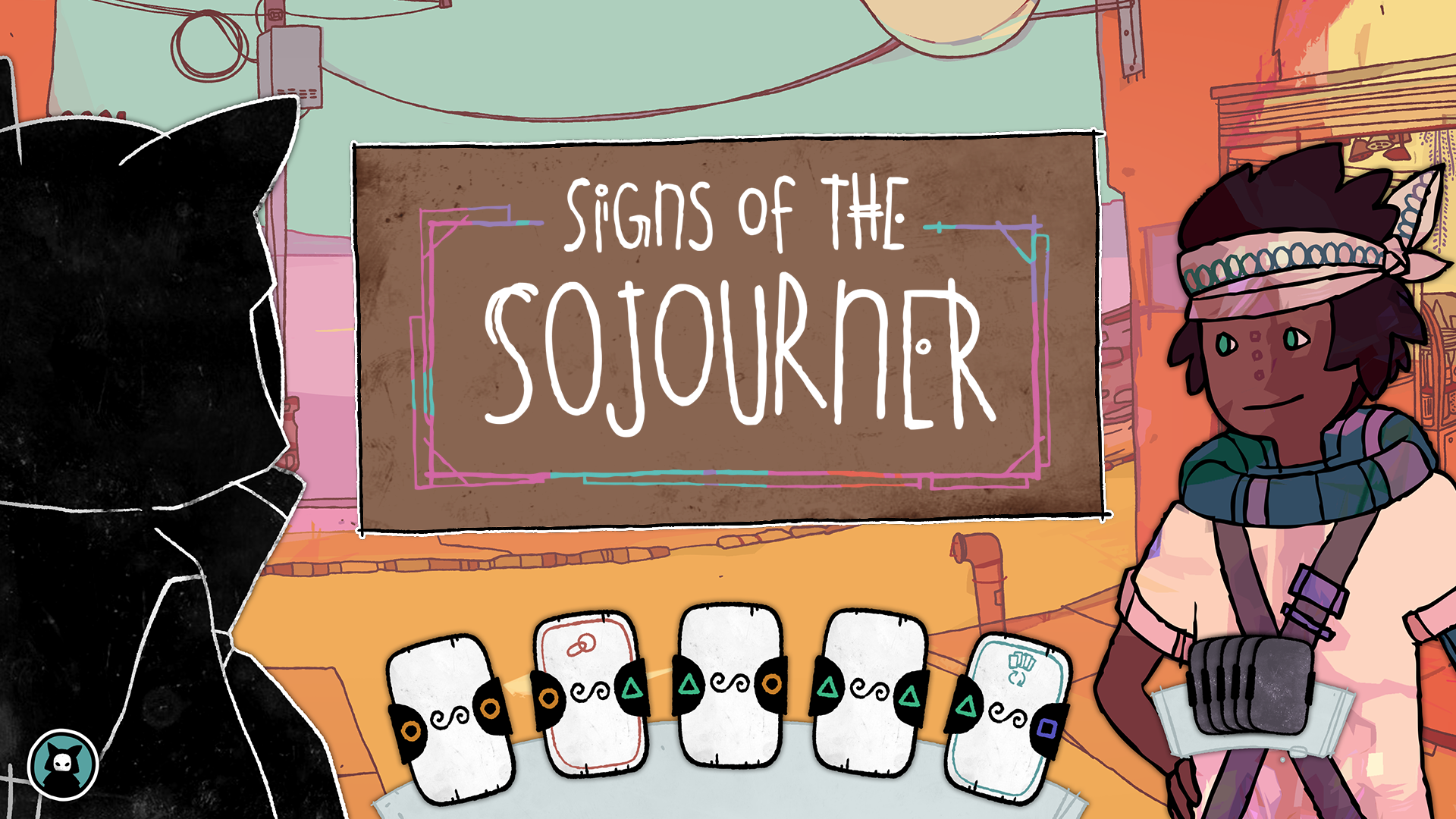 The idea of the game is that you are the owner of a shop at a small village, and you get to wander to nearby communities to find items to stock your store with. 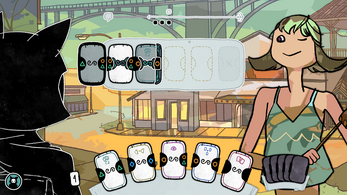 This is where the game tries to mix game mechanics and narrative. The most obvious is the “fatigue” card. When you travel for too long, you start to receive these “fatigue” cards, which don’t match with anything. This tries to reflect how your character is too tired from travelling and becomes irritable.

In a more subtle way, every time you talk to somebody, you receive one of the cards that person used. Each area of the game tends to use more of one symbol of another, meaning that the more you visit one area, the more cards of that area will enter your deck, and the easier will be to talk to people in that area (and it will be harder to talk to people in other areas). This mimics a bit the idea of finding your social niche.

I really like how the game does a lot to integrate the mechanics and narrative. For example, which cards an NPC has also tends to reflect how accommodating that NPC is to strangers.

The game is not without its problems. The strategies for “succeeding” in conversations with NPCs are not very clear, and it is very easy to find yourself in a situation where you are failing almost all of the conversations. The game tries to imply through its text that it is okay to not agree with some people, but the interface and sound effects work against that most of the time. It also seems that the conversation options are either “enthusiastically agree” or “rudely shut down”, with no clear way to politely disagree with what another character proposes.

Also, from a technical point of view, the game’s Unity build has a very poor interaction with Wine, which means that it would lock me if I alt-tabbed away from it :-(

However, all in all I really liked this game, and I think this is a great experiment in trying to mix gameplay and narrative together.

The game also has several endings and sub branches. Although replaying it takes a bit too long, this means it can be a cool game to play in parallel with friends and discuss the different paths that each person took.

A few weeks ago I watched a video on Kurzgesagt about cultivating new habits. I really like the way that Kurzgesagt break down concepts (and also their animations!), and this video really made me motivated to try and pick up some better habits.

I thought that I could try to make programming simple pico8 games as a new habit following their ideas. Since my birthday was quite close, I decided to buy the book that they created in tandem with the video. Also, I have seen so many of their videos, I thought it was about time to give them something back. 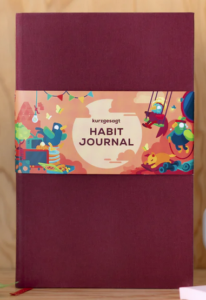 The book arrived last week, and it is really pretty and well done. The first few pages of the book is a review of the concepts in their video. Then they have a “tutorial” section where you try to cultivate a simple habit for 9 days. It starts really simple, and every 3 days the habit gets a bit more complex.

After this “tutorial” period, you are invited to create 1-4 habits following the same pattern as before, and record them for several days. If you track 4 habits, the book has space for about half an year of tracking.

So how do I plan to use this book?

At first, I thought that I wanted to turn Pico-8 programming into a habit. I still want to do that, but after reading the book, I decided to start with something much simpler for the introduction: For the first three days, I will start with just sitting down on my computer and writing down my ideas for a single pomodoro.

They really emphasize the idea of start small. I could make it even smaller, and just clean my computer of all distractions for the first stage, and write 2 pomodoros for the second and third stage. I might even make one of those a pico8 programming pomodoro.

Of course, when you decide to “write” stuff, the question then becomes “what to write about.” I have a few loose notes in my ideas folder (under a handy “toblog”) tab, so I could start by clearing those up and actually blogging them. I also have some dead links to fill in, and games that I played in the past. Also re-reading backlog.

A more sustainable solution would be to include the seeding of ideas in my writing process. Maybe as I advance this, I should include some time to write down and organize ideas, and then pick one of those ides to concentrate and write.

Well, one step at a time, I guess. For now, I will write one pomodoro a day (although maybe not everything will become a blog post)